Installation and film, 2007, was my first piece of work that directly links to my on going research and interest in food following. The background to my interest I have detailed at the bottom of this text.

I decided to make a work that looked at food following, from this country, instead of the more traditional food produced elsewhere. I made a piece that followed food grown in my then home village of Stewkley, Buckinghamshire. I wanted to know where it went and about the lives of the farmers in this seemingly prosperous area of the world, a pretty village nestling within the Buckinghamshire countryside, 50 miles from London.

I talked to many farmers, and as my research progressed, I found myself predominantly talking with dairy farmers.

I found each conversation was the same, how dairy farming used to be ok, they could make a living in the 1970s, they were paid more; how the Milk Marketing Board, that used to exist as a government organisation, was disbanded in 1994 and since then it has become too hard, and certainly for the farmers I spoke to, impossible to make a living. 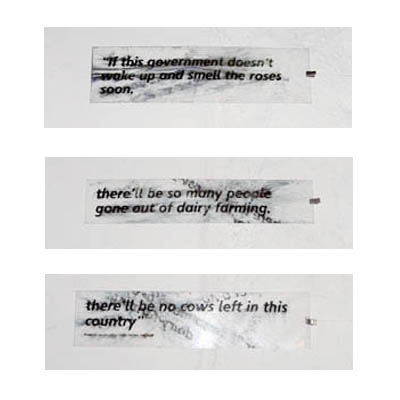 Anonymous Stewkley dairy farmer: “If this governement doesn’t wake up and smell the roses soon, there will be so many people gone out of farming, there’ll be no more cows left in this country”.

The conversations I had with 3 farms have revealed some shocking stories, here are just a few:

• A tenant farmer, who has farmed all his life in Stewkley will not be able to pass on the tenancy to his son when he dies. Buckinghamshire County Council will repossess the land and the land will be used for housing. The son’s family are having to look at emigrating to Canada.

• The Cornish farm (which was my primary source), cannot make a living now through cattle – dairy or beef; they are letting their cows die off naturally and have had to diversify.

• The government does nothing – if they insisted that farmers were paid enough to make a living (25p per litre), the cost of living would rise, now why would they do that? (quote from editor of a national farming magazine who would not like to be named);

•In the 1970s small dairy farmers could make a living in dairy farming.

• Farms have had to buy quota in order to sell milk, if they go under their quota they do not get paid for the amount under, yet if the GO OVER quota, they are also penalised on every litre.

• Does the dairy pour the milk away rather than sell it to Tesco? NO. Does Tesco still sell the milk? YES. It is only the farmers who lose out…

There are many more tales that add up to abuse of our small dairy farmers.

The installation Milked Dry, 2007, comprises an 8 minute film; an interactive sound piece of the conversations I had with the farmers; a UK map and model cows; a book full of quotes from my conversations and images of the very beautiful farm, I also hung some more quotes and images around the walls of the gallery.

In 2004 I made contact with Dr Ian Cook, now Associate Professor of Geography at the University of Exeter.

His writing about papaya grown in Jamaica really grabbed my attention – (Follow the Thing: Papaya: Antipode, Volume 36, Number 4, September 2004, pp. 642-664(23)). He wrote of the farm workers who pick the fruit, the damage caused to the people’s hands by it’s poisonous skin, the prices paid to the workers versus the prices we pay here, the injustice to the pickers and the farmers; how we as consumers know nothing about the lives of people who provide our food.

It fuelled the side of me that is outraged at how certain people are victimised around the world, how the supermarkets are destroying people’s lives.

Ian wrote the paper in response to a call by geographer David Harvey who asked ‘that radical geographers should attempt to de-fetishise commodities, re-connect consumers and producers, tell fuller stories of social reproduction, and thereby provoke moral and ethical questions for participants in this exploitation who might think they’re decent people’.

In 2004 I also found the piece by artist Shelley Sacks, Exchange Values: Images of Invisible Lives, which lives with me always. It is an installation featuring stories of the growers of bananas in St Lucia; how they work so hard to please us, the consumers, how little they get paid, how they could at one time make a living, but now the supermarkets continually force the prices down, they cannot afford to eat properly, let alone educate their children.